Joseph Hillier was commissioned by Transported and the Spalding and District Civic Society in 2016 to create a series of sculptures reflecting the people who together reflect the unique character of Spalding and its importance to the Nation's food supply. 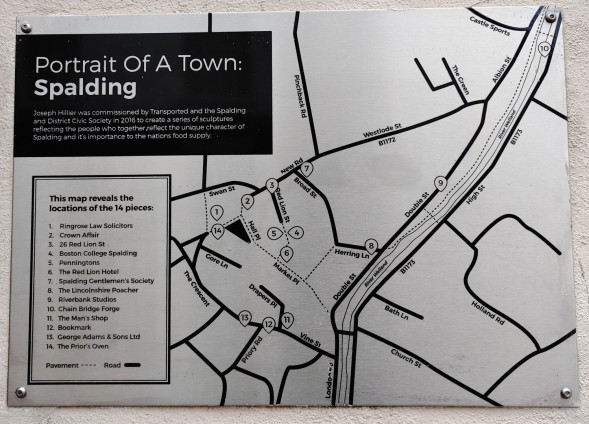 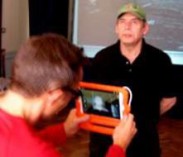 "Each time is a discovery,” said Joseph Hillier, illustrating the variety of his sculptures  over the last ten years – especially when exploring such new techniques as laser-cut steel and digital 3D imaging.

Joseph was the artist commissioned by the Society and Transported for the first public art work in our ‘Market Art’ project, and he was talking to an audience of over 70 in the South Holland Centre on 14 July 2015. Among the most striking photographs were those of sculptures he had recently completed for a theatre in Plymouth, developed from a production of Othello.

He demonstrated the 3D imaging technique he would be using in Spalding. With a device no larger than a school atlas waved along the people in the front row he produced an image on the screen behind something like a Leonardo da Vinci drawing.

His work for Spalding is inspired by the annual Statute or Hiring Fair which was held in Hall Place every May. Rather than a large single figure, the work takes the form of over a dozen wall-mounted small bronze reliefs clustered round Hall Place and fanning out into the Pied Calf Yard, Red Lion Street, the Hole-in-the-Wall Passage, and so on. A visitor might come upon one unexpectedly or could more methodically follow a trail.

An open invitation via the local press and on-line for models to be immortalised in bronze produced an interesting succession of people on 25 and 26 September 2015: an evacuee from WW2 who stayed, a drainage engineer, an elderly village postmaster and his wife, a schoolgirl, a gardener whose father and uncles were farmers, a local councillor, a market trader ……

Each of them was first coaxed to talk about their lives and memories of South Holland (prompted by archive photographs, for example). “My father, I remember, owned a reaper-and-binder, which threw out sheaves at the back, and these …,” lacing his fingers into an A-shape, “were stooked across the field to dry.” Joseph was listening for the words that for a variety of poses for the bronzes. 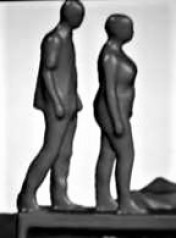 Then he would circle crabwise round the model with the imaging device.  The father and son hanging from a ledge by their finger-tips, the young couple crossing a bridge (right: the resulting 3D image), a blacksmith with raised sledge-hammer, and so on. “Where in Spalding do you and your friends normally hang out?” to the schoolgirl. “Well, we go to the Candy Bar, then Bookmark, and then sometimes sit on a wall with chips.” “So what about sitting on the edge of the table there?” Pause. “I don’t want to be immortalised eating chips.”

After people had posed for Joseph Hillier’s 3D imaging camera the images were captured inside his computer. Here each image could be turned this way and that in search of the most effective angle and be manipulated in all sorts of other ways too: the background eliminated, for example, the rear of the figure shaved flat if it was eventually to be mounted on a wall, or a limb adjusted slightly to fuse it with a prop so that the final figure would be less vulnerable.

The faces of course remained untouched. These are local people: the young blacksmith, the drainage engineer, the farmer and author, the market trader.

By now the figure was beginning to look statue-like , but it was still only an electronic image.The figures have no physical actuality.  That was the next stage, when the electronic image was fed into a 3D printer and, layer by plastic layer, a solid physical object built up. It was these plastic models, given a coating of graphite dust to make them look like metal, that we saw at the end of January 2016.

Once planning applications for their sites in the town centre had been submitted and approved the little figures were cast in bronze and were unveiled on 22 April 2016.

Time has seen the bronze mature and many people have since walked past without noticing them but some may just catch sight of one of the fourteen that are to be found around the town out of the corner of the eye. 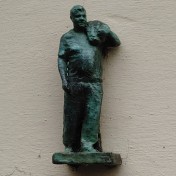 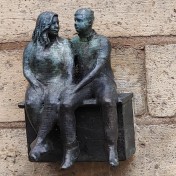 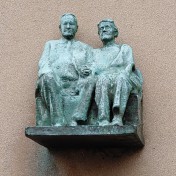