This article by Anthony Keeling originally appeared in our June 2017 Newsletter. 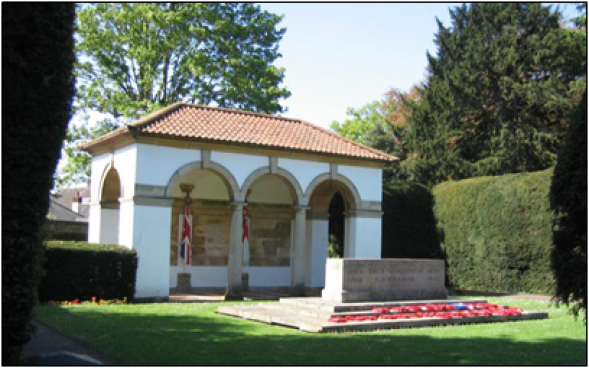 Britain's Most Famous Architect a hundred years ago was Sir Edwin Lutyens (1869-1944). He designed Castle Drago in Devon and many country houses in the heyday of Edwardian country house building. After the First World War he designed our best-known war memorials, such as the Cenotaph in Whitehall and the massive memorial in Thiepval, Northern France, to those who died in the Battle of the Somme. He also designed more modest memorials, such as ours in Ayscoughfee Gardens.

About fifty of his designs are reviewed in the superbly produced and researched monograph by Tim Skelton and Gerald Gliddon, Sir Edwin Lutyens and the Great War Cemeteries and Memorials (pub. Frances Lincoln). But there’s only one given a whole chapter to itself: Spalding. When one sees the vast range of  these memorials, our memorial, in the style of a doric temple with a low-pitched pantiled roof, stands out as an elegant, under-stated gem.

The inspiration for it came from the family of the Spalding M.P. Francis McLaren, who died in 1917 while flying with the Royal Flying Corps in France. Although his home was elsewhere, his widow was keen that he should be commemorated in Spalding along with all others from Spalding who had died in the war. It was Mrs.McLaren, a niece of Lutyens’s garden-designing partner Gertrude Jekyll, who commissioned Lutyens to design the memorial. The original designs were quite extensive, with an almost Mediterranean atmosphere, and met some local resistance, even though the McLarens would be contributing a significant sum themselves. However, with an adapted, cheaper design from Lutyens – creatively distilling the building to the best core part we see today – the building garnered the necessary public and financial backing and was built in 1921/22.

We are very lucky that our war dead are commemorated so beautifully. The memorial’s outstanding architecture was recently recognised nationally when it was upgraded to a Grade I listing (joining the Cenotaph and six others by Lutyens). So shouldn’t we in Spalding do more to make our memorial more appreciated?  For a start, we could have a sign at the entrance to Ayscoughfee Gardens to show where it is.