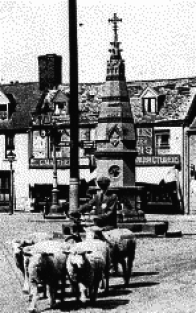 It was with some concern that we read in a Voice report that the Cemetery Improvement Group have suggested that the Fountain be installed in the Cemetery. There could hardly be a more unsuitable place. In a cemetery it is bound to be perceived as the memorial of somebody-or-other who died and was buried there.

On the contrary, it was a monument of gratitude to someone who was very much alive in 1874 – Miss Mary Anne Johnson – for the gift of life that she had brought to thousands of ordinary Spalding people. Her £150,000 (in modern money) enabled water mains to be laid along the three or four principle Spalding roads, bringing pure drinking water to whole areas of the town previously dependent on more or less contaminated well water, with the often fatal illnesses that resulted.

The Fountain was designed for the Market Place (with a last minute change to Hall Place); and Spalding lost a distinctive part of its character when it was dismantled to make way for an experimental traffic scheme in 1954. To restore it to the centre would be to restore some of that lost character. And it is of course a ready-made feature for the regeneration of the town centre, to which SHDC is pledged.

A follow-up letter to The Voice making these points set social media buzzing – overwhelmingly in favour of the town centre. Spalding people, it seems, clearly want to see the Fountain back again in a place in the town where it has meaning. It is an emblem of life, not death.