This article by our President John Charlesworth appeared in our June 2018 newsletter. 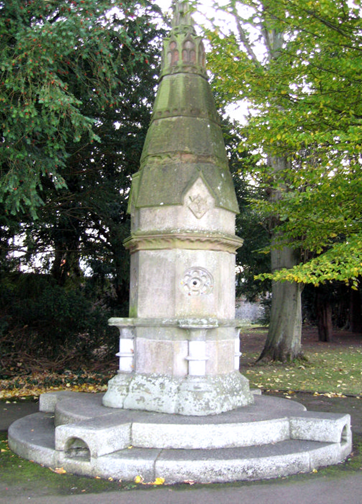 At the same time as he was working on his designs for St.John’s Church in Hawthorn Bank, the London architect Robert Withers was also working on the Johnson Drinking Fountain. The fountain is made of limestone, its tapered octagonal column encircled by  darker reddish bands and topped with an ornate metal cross. The cross, however, is only the tip of a long metal rod that runs down through the upper stones to strengthen the slender part of the ‘spire’. The whole stands on a stepped plinth of granite.

Carved on alternate faces of the column are the Johnson family arms. Lower down, the four metal water spouts stick out from carved rosettes. Each stone basin below originally had a heavy metal cup on a chain. The four ‘rabbit-holes’ round the base seem to have supplied drinking water for dogs.

Just how the fountain worked remains something of a mystery. No-one who remembers it running has so far been sure. Peter Start, for example, thinks he remembers there was a spring-loaded button of some kind, but Peter Elliff thinks it probably ran all the time. Jack Tyrrell, who oversaw its recent dismantling, is inclined to the latter view, although former drainage engineer John Honnor points out that this would have been very wasteful. Perhaps each spout had a tap or spigot of some kind. [So any further information would be gratefully received.]

What everyone does clearly remember, however, is that they drank the water from their hands. And behind the youngsters of 60-odd years ago one can hear the sharp voices of a hundred Spalding mums: “And don’t you dare drink out of those cups! D’you hear? You never know who’s been using them!”

It doesn’t seem to have been altogether plain sailing after the installation, though. It was several weeks before the water began to flow and, when it did, reported the Stamford Mercury, “the juvenile population, … in their usual exuberance of spirits on seeing something new, must have a game, throw the water about, break two of the cups, and perform other little antics, very naughty but very natural with schoolboys” (September 1874). (No doubt a thumb over the end of a spout would very satisfactorily drench your mate.)

And it wasn’t only schoolboys. The directors of the Spalding Water Works Company were annoyed to find householders who were not yet connected to the new mains or others trying to minimise their water bills treating the fountain as if it was a public water pump, like the one that had formerly occupied the site. They gave notice “to all persons using the water from the Fountain for domestic purposes that such use cannot be allowed and in the event of their persisting to do so proceedings will be taken against them”.

But novelties fade. Schoolboys find fresh pranks and running water in the house becomes the norm, and so the drinking fountain settled down into an accepted part of the street scene. The Johnson Fountain really is something rather special, though. Victorian public drinking fountains were usually cast iron. It is its  stone construction and monumental scale that make it special – a feature to celebrate, not hide away in a walled garden. It is part of our history, an obvious way to strengthen the identity of our town centre again and give focus to, say, the Market Place, and, with the water running again, part of the national fight-back against the plastic bottle scourge. (It would require very little modification to meet health-and-safety needs.) Past and future flowing together.

Many thanks as always to Michael Elsden and Norman Leveritt’s Aspects of Spalding, and those mentioned above, particularly Coun. Jack Tyrrell for the details of the fountain’s construction.