2022: Why we have launched a Petition

This article by our Chair, John Bland first appeared in our February 2022 Newsletter 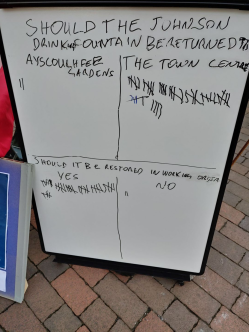 One of the  longstanding aims has been to see the Johnson Drinking Fountain returned to the town centre, as a working fountain. Amongst other desirables, this would enable it to be part of the solution to plastic pollution in general and would help reduce the amount of waste from single-use plastics, such as water bottles, that the Council has to dispose of.

The Society has identified a number of funding sources that we believe could be explored to help finance the cost of restoring the fountain. They are:-
● Anglian Water Services. We feel an approach would be appropriate in view of the many years in which The Chatterton Tower was their HQ before privatisation. Their website suggests that they would be able to provide the expertise to connect the water supply free of charge.  They are also actively involved in the regeneration of Wisbech. Would they be willing to contribute towards the cost of restoration?
● The Drinking Fountain Association would be another potential source for expertise and a possible grant (up to £2,000).
● Heritage Lottery Fund
● Historic England
● Crowd funding. Many people in the town would like to see the fountain restored. How much could be raised through a public appeal?

It had been our hope that, through the town centre regeneration Steering Group, there would be an opportunity to explore the viability of various sites in the town and to explore the funding solutions that the Society has identified to arrive at some fully costed options, which could then have been put to the public for their say. It is a matter of regret that this course of genuine engagement with the community has not been followed. Instead, we received a phone call, just a few days before an announcement was to be made, informing us that a Council sub-committee had decided to return the fountain to Ayscoughfee Gardens.

We were told that the matter had been discussed at length in numerous meetings. We have requested sight of the minutes of those meetings but, at the time of writing, have not been supplied with them. This lack of engagement is one of the reasons why we have launched our petition calling for the Johnson Drinking Fountain to be restored to the town centre in full working order.

The Society has for years put forward proposals that would have made a real difference to the town. A consistent element has been the restoration of the Johnson Drinking Fountain to the town centre. As reported recently by the Spalding Guardian, 30 years ago external town planning consultants came to the same conclusion as we have: the Johnson Drinking Fountain must be returned to the town centre. If you are not amongst the hundreds who have already signed our petition, it can easily be found at https://chng.it/btqLPwXFJc.
Given the public reaction in support of our campaign, we hope that the Council may yet come back to the table and engage in meaningful discussions with the Society and other stakeholders, which is what it should have done over the last year.