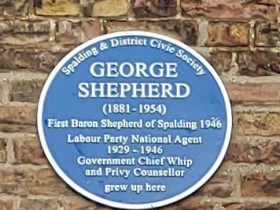 George Robert Shepherd, 1st Baron Shepherd of Spalding, was born at 4 New Road, where his father was a tailor and lived above the shop (now the Mobile Centre). He was educated locally and by the age of 19 had become the manager of a shoe shop in Bradford.

His marriage in 1915 to Ada Newton, who was an active trade unionist and campaigner for women’s rights with the support of Quaker families such as the Cadburys and Rowntrees, no doubt influenced his becoming a con- scientious objector during the First World War and strengthened his involvement with the Labour movement. He was Assistant National Agent for the Labour Party from 1924 to 1929 and then National Agent until 1946.

When Sir Winston Churchill requested that Clement Attlee and the Labour Party enter into a wartime coalition, it was Shepherd who negotiated the terms of this all-important agreement, and he was in charge of the party agents nationwide when Labour swept into government in 1945. He was raised to the peerage in 1946 as Baron Shepherd of Spalding, becoming one of the first Labour peers in the House of Lords, serving as party whip until 1951.

The blue plaque was unveiled on 20 July 2019, by Patrick Shepherd, his Great Grandson.