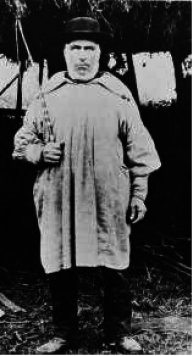 Spruced and sprigged as best they could, farm-hands and domestics would crowd into Spalding on the day in May appointed for the annual Statutes or Hiring Fair. It was the  same  everywhere.  Shepherds and ploughboys, cooks and dairymaids looking for a place, were mostly hired for a year at a time, with a week’s holiday in May. They would stand around or parade back and forth amongst the farmers and potential employers with a token of their particular skill. “Carters and waggoners were distinguished by having a piece of whip-cord twisted round their hats; thatchers wore a fragment of woven straw; shepherds held their sheep-crooks in their hands” (Thomas Hardy: Far from the Madding Crowd).

A deal was sealed by a handshake and the new employer handing over a shilling or a crown (the “fasten penny”). “When a lad was engaged, he used to deck himself out in all kinds of various coloured ribbons, to show that he had a place” (E.H.Gooch: A History of Spalding). Then the fun could begin.

With a full year’s wages burning a hole in so many pockets and purses, it is not surprising that the hiring fairs were a magnet for travelling showmen of all kinds, with their coconut shies, tickling feathers and penny-squirts, shooting galleries, freak shows, roundabouts and swing-boats, along with the cheap- jacks, confidence tricksters, nut-hawkers, card- sharpers, pickpockets and other prowling vagabonds with an eye on easy pickings. Pubs laid on “two- penny hops”. And by the middle of the 19th century hiring fairs had become notorious for their rowdy horseplay, drunkenness, brawling and general licence. Although the worst excesses began to sub- side as the century wore on, the Spalding Free Press for May 1877 records:-

“We saw much more real or sham intoxication – for undoubtedly in many cases, Hodge had a idea that to appear intoxicated is just the proper thing at a statute - than we cared to see.”

Victorian broadside ballads about hiring fairs follow a pretty standard pattern: the togged-up lads and lasses head for the nearest market town in the spring sunshine, then comes the merry-making, flirting, dancing, drinking and drunkenness, with a final warning to all fair maidens to beware of young men! In Spalding in the 1880s and ‘90s, Gooch recalls, couples who had “clicked” would “make their way to the nearest quiet country lane … to play the oldest game in the world”. Peck’s Drove and Cunningham’s Drove were apparently the favoured spots and, “though ordinarily they were the loneliest places one could imagine, on ‘Status Day’ they were packed with courting country couples and it was impossible for them all to find a secluded spot”.

There were voices raised of course against the general licence of the hiring fairs, some as early as the 18th century, rising to a determined campaign to abolish them in the 1850s. For the Archdeacon of Lincoln Cathedral there was an even more fundamental objection than the general licence:-

“There is something very un-English in hiring servants off the stones; and though we do not object to the servants’ annual holiday, we scarcely know of a more disgusting proceeding than that of men crowding amongst females and selecting their servants just after the same manner as they choose pig, cattle or sheep.” (Spalding Free Press, 12 May 1857)