This article by our President John Charlesworth originally appeared in our February 2018 Newsletter. 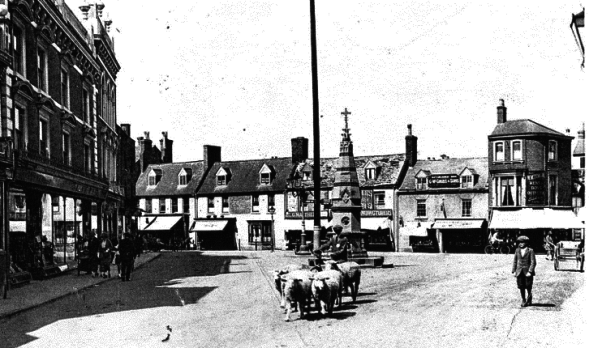 “The munificence of Miss Johnson has extended the boon of pure water to the poor …. To her there must be a great inward satisfaction of doing good. We are sure this is supported by the deep gratitude of the poor – a gratitude that will grow and expand as the years fly past. In our minds it but crowns the edifice of a long list of noble gifts and deeds that will not soon be forgotten …”

The average life expectancy in Spalding in 1850 was 23 years and 9 months. Roughly a third of children died before reaching 5 years old. This is not perhaps surprising, as most people were dependent on well-water, which was more or less contaminated as there was no sewerage system. (The well-to-do could buy spring water by the pail brought in from Bourne in water- carts.)   There were six slaughter-houses near the town centre, none of which had proper drainage, with the waste thrown into cess pools or boiled for pig-food. Cess-pits were often no more than open ditches and in the worst quarters of the town human excrement was piled up in the centre of the cramped courtyards. A government health inspector reported seeing “more squalor and misery [than] could scarcely be surpassed in the crowded lanes and allies [sic] of the Metropolis itself”.

The local authority showed no concern to improve either water supply or sewage disposal, preferring to use the improvement rate to put gaslights in the streets, build a corn exchange and buy land for a cemetery, and it was left to the newly-formed Spalding Water Works Company (1860) to set up a private water works, with filtering beds and a brick water tower. This was in Pinchbeck Road (where the open-air swimming pool was later built), with the water piped along Pinchbeck Road to a limited area of the town centre. At first water was drawn from  the Blue Gowt Drain, but this proved unreliable in times of drought, so in 1870 an Act of Parliament was obtained and capital raised to pipe spring water from Bourne to the Spalding Water Works.

It was, however, solely due to an act of personal generosity that this supply of good-quality water was extended to the poorer parts of the town. In 1873 Miss Mary Ann Johnson gave the Spalding Water Works Company £1,500 – that is, £150,000 in today’s money – to lay water mains along Winsover Road as far as the ‘Robin Hood’ and then up Hawthorn Bank; along Holbeach Road to the ‘Pigeon Inn’; and along London Road to Little London. To mark their gratitude to Miss Johnson the Company decided to erect a commemorative public drinking fountain in the town centre.

The fountain was designed to go “in the Market Place”. Hence its impressive size. Work had begun on the mains in November 1873, and by July construction of the fountain was under way – now in Hall Place – on the site of an old pump. By the beginning of August it was complete.

The dismantling in 1954 was controversial. “One of the biggest crimes that has happened in Spalding,” said one councillor. Basically a group of councillors wanted the fountain out of the way because it was interfering with the County Surveyor’s experimental traffic measures in Hall Place. None of them had given any thought to its re-siting – or indeed whether to re-erect it at all. The Council approved the dis- mantling by the narrow margin of 7-5 on the Wed- nesday evening, and by teatime the following day it was gone. “If other things were done as quickly it would be nice,” commented one member of the public. There was no coherent overall plan. It was not until two years later that it was decided to put the fountain together again, in Ayscoughfee Gardens.

Once again the fountain has been dismantled, this time to make way for the WW2 Memorial. Its pieces are temporarily in storage at the Council’s works depot; but SHDC Chairman, Councillor Rodney Grocock, has pledged that the fountain will eventually be re- erected in the town.

Where? The Society has long wanted to see the fountain brought back into the town centre.

There are many reasons:-