Research by the late Marion Brassington. 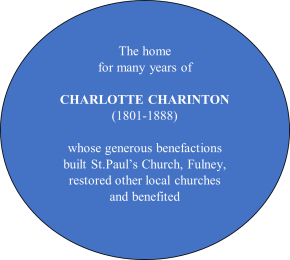 A Victorian Novelist - Anthony Trollope perhaps or George Eliot – might well have seen a potential plot in the apparently uneventful life of Charlotte Charinton, quiet spinster philanthropist in a small market town.

Born in 1801, she was the younger daughter of a wealthy Gedney Hill farmer, Thomas Charinton. When he died, she inherited the whole of his estate, as he had disinherited her elder sister Sarah for eloping with a bricklayer and refused to recognise the marriage.
Eventually moving to Spalding, Charlotte settled in at No.11 London Road, where she lived frugally for the rest of her life. Devoting her inheritance to various churches in South Holland, she financed the restoration of the parish churches of Holbeach, Gedney Hill (seriously damaged when struck by lightning), Cowbit, Fleet and St.Mary and St.Nicolas Church in Spalding, whose vicar, the energetic Canon Edward Moore, had at some point become steward of her land and properties. She was a major contributor to the building of Canon Moore’s second new Spalding church, St.Peter’s in Priory Road. Church schools, too, received generous donations, not to mention private charitable gifts to individuals in need.
She wanted in the end to leave all her remaining money to her sister’s grandchildren, as she felt guilty about having inherited all of her father’s money. However, Canon Moore persuaded her to finance the third new church he wanted to build, at Fulney. And so, St.Paul’s Church was built and endowed, together with its vicarage and schoolroom, entirely at Charlotte’s expense. (The London architect chosen by Canon Moore, the renowned Sir George Gilbert Scott, cannot have come cheap.) Her grandnephew Richard Guy Ash was installed as the vicar. 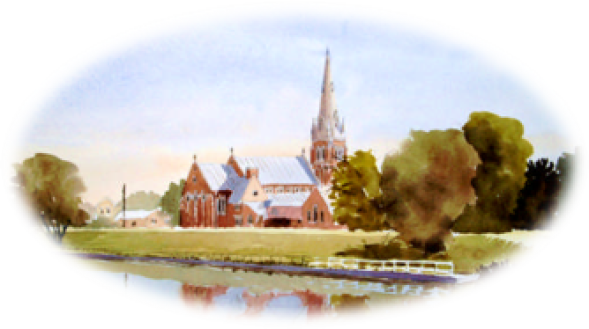 When Charlotte died in 1888, she left her estate, not to her sister’s grandchildren, but to be shared between Mr.Algernon Peckover, a Wisbech banker, and …… yes, the Revd. Canon Edward Moore.

The Ash family disputed the will. The local press speculated. “Should the dispute come within a public court, some very sensational evidence may be expected to be produced, and the legal struggle in which the principle figure of the Vicar of an important parish, advanced in years and rich in worldly goods, is likely to create no small stir not only in this locality but throughout the country.” But the case was settled out of court and the Revd. Ash received some remuneration. Canon Moore died in 1889.

But whatever the moral conflicts for those involved – of love v. class, family v. religion, religious calling v. worldly prestige, and the use or misuse of a powerful position – we all remain in Miss Charinton’s debt. South Holland, like most of Lincolnshire, is rich in mediaeval churches, and that the architectural glory of many local ones was preserved from neglect or misguided alteration owes much to the quiet munificence of Charlotte Charinton.