From a talk given in Spalding by Dr J.W. Skinner M.A. PhD, Headmaster of Culford School, Bury St Edmunds, and formerly Lecturer at Westminster Training College on Friday 23 April 1937 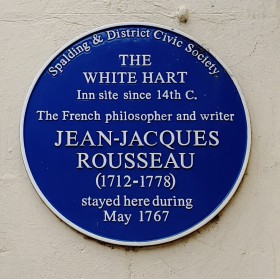 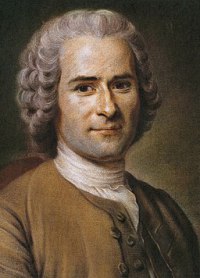 Jean Jacques Rousseau, who had landed in this country to find refuge, had been staying for some months in Wootton, Derbyshire. His idea was to make England his home, and there had been extracted for him a pension of £300 a year from George III. Somehow he turned up in Spalding, when he had decided to return to France, presumably on his way to Louth to meet a Swiss compatriot. “While at Spalding. Rousseau made the acquaintance of the Vicar (the Rev Dr. Bingham), a member of the Gentlemen's Society. A doctor in the town, Dr. Jessop. wrote Rousseau long and fulsome letter in Latin, starting; 'The greatest philospher of our time.’ and received a somewhat rude and cold reply. Dr. Jessop had said to Rousseau 'It is clear to anyone who thinks that you alone know the mind of a child that you alone are able to explore it, and that you alone have found a shorter way to its self-realisation.’His one criticism of Rousseau was: 'The theories you propound on the subject of education are undoubtedly of practical value, but they threaten too strongly the profit of the teachers and academies of learning.'