This article appeared in our July 2022 Newsletter

If ever there was a historic asset calling to be included in any regeneration scheme for the town centre, it is the Johnson Drinking Fountain. That certainly seems to be the view of the Heritage Sub-Group of the Town Centre Regeneration Steering Group, set up to make recommendations for the town centre's streets and public spaces.  One of the opportunities they identify in an initial report reads:- 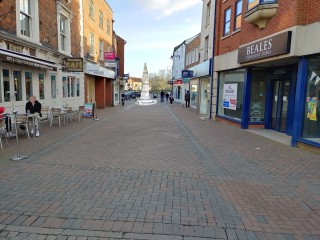 “An "eye-catcher" artwork or feature such as the Johnson Memorial Fountain at the end of Bridge Street could draw people towards the river. Perhaps with landscaping?”

Any recommendation that the Heritage Group might have made about the Fountain had thus been pre-empted, and their work and standing undermined.

On 4 April a planning application to site the Fountain in Ayscoughfee Gardens was submitted; and withdrawn a fortnight later. It needed a few tweaks, it was announced. It needed rather more than a few, however.

The Society's inspection of the Heritage Impact Assessment (HIA) accompanying the application revealed it to be a slipshod document, full of factual errors, exaggerations and Aunt Sallys. For example, Kingston‟s Corner, built in 1908, is said to have been built after World War II. Time is wasted on pointlessly trying to work out where the Fountain originally stood – pointless because:-

The only two sites considered in the HIA are Hall Place and Ayscoughfee Gardens.  Why?
Other suggestions put forward by the public include the Market Place, the Sheepmarket and Swan Walk, as well as the end of Bridge Street.

The application was submitted again on 19 July, with the HIA improved by correcting virtually all the errors, etc., the Society had pointed out.* Nevertheless, the choice of Ayscoughfee remains unacceptable both to the Society and overwhelmingly to the general public, so far as one can judge.

Meanwhile, we have been trying to find out just how the councillor group came to be set up, inevitably weakening the role of the Heritage Group as it does, and how Ayscoughfee Gardens came to be the preferred option, and so on.

Our first Freedom of Information (FOI} request was made in January and responded to only in April, although the Act requires a response to be made within 20 working days. Our request was refused, as it would “exceed the permitted officer time” to deal with it. Our second FOI request was made on 25 May. As we‟d had no reply again within the 20 working days, there seemed to be no alternative but to make a formal complaint to the Information Commissioner's Office. This we did, and it is now being taken up.  We await developments.

*If you'd like to see how unsatisfactory the original Heritage Impact Assessment was, our analysis is on our website.

Read our analysis of the original Heritage Impact Assessment here.