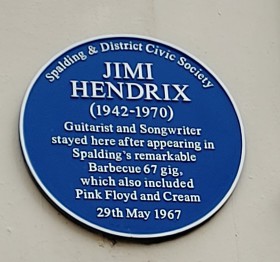 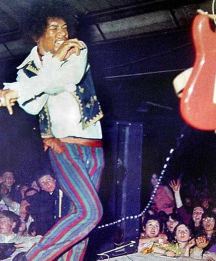 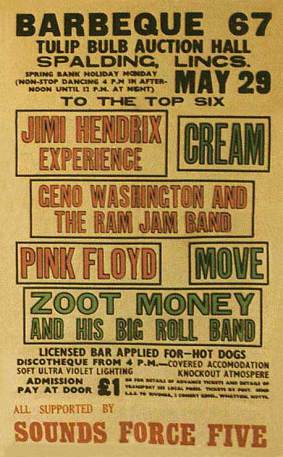 Jimi Hendrix was born Johnny Allen Hendrix in Seattle, Washington State on 27 November 1942, and is widely renowned as one of the most influential guitarists in rock music history.

Towards the end of 1966, Grantham promoter, former footballer Brian Thompson, set about booking Geno Washington and the Ram Jam Band and The Move. Their management company persuaded Thompson to also book three then relatively unknown acts at that time, being Pink Floyd, The Jimi Hendrix Experience and Cream (with Eric Clapton).

Zoot Money's Big Roll Band were booked along with a local covers outfit, Sounds Force 5, who were booked to ensure a decent turnout and were to perform in all changeovers between each band at the side of the stage. The result was "Barbecue 67 which took place on 29th May 1967
Advertising was national and massively underestimated, with thousands making their way to the market town causing national radio to warn travellers to turn back.
The event was held at the bulb auction hall on Winfrey Avenue, with the Spalding Town stand in the adjacent Sir Halley Stewart Playing Field being utilised as covered accommodation. Various estimates of numbers have been estimated with a venue capacity of 6,000 and twice as many unable to gain entry. Tickets cost just £1.
The plaque was unveiled on Friday 20 February 2015 by members of Sounds Force 5. A comprehensive report of the unveilling at the Red Lion Hotel on Market Place where band members stayed appeared in the May 2015 edition of Lincolnshire Life whilst The Red Lion Hotel also have a page recalling the festival.
Photo's kindly supplied by Colin "Fred" Ward, member of the local band Sounds Force 5