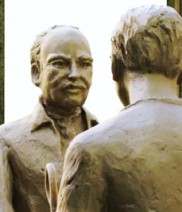 A Farmer and a shepherd shake hands. A shilling has been handed over. The young shepherd is hired. He will work for the farmer for a year, bed and board provided, and will be paid only when his twelve months are up.

In its hand-shake moment, Laury Dizengremel’s sculpture commemorates the annual Hiring Fair held each May in Hall Place, when farm-workers and domestics converged on Spalding to offer their skills to employers in search of a shepherd or ploughboy or dairymaid.

With a full year’s wages burning a hole in so many pockets and purses, the hiring fairs were also magnets for travelling showmen of all kinds, with their coconut-shies, freak shows and roundabouts, along with cheapjacks, card-sharps and pickpockets. There was music and dancing, drink and rowdy horseplay. And 19th century broadside ballads based on hiring fairs nearly always end with a warning to fair maids to beware of young men! Respectable townsfolk did not approve of the fairs.

Whilst Laury’s farmer and farm-hand look back to 19th century agriculture, they also reach out to their 21st century counterparts in South Holland’s food production, as depicted in many of Joseph Hillier’s 14 small bronzes on buildings in the town centre.

By happy chance Joseph’s 21st century bronzes have in part been created using 21st century digital technology, whilst Laury’s 19th century farmer and shepherd are bronze sculptures made in the traditional way. Apart from the initial photography, the same process can be traced back for several thousand years.

First, Laury took photographs of her nephew and his mate acting out the hand-shake between farmer and shepherd. With these as a guide, the actual process starts with the sculpture being created in clay. The sculpture is then encased in plaster to form a mould. From this mould a wax replica of the original sculpture is now created, exact in every detail except that it is hollow.

In its turn, the wax replica is encased in a thick ceramic shell.   With the wax still inside, the shell is fired in a kiln, so that, when the wax melts and runs out through vents, it leaves behind a second perfect mould. It is into this very strong ceramic mould that the molten bronze (at about 1150 O C) is poured. When cold, the mould is broken away and the third and final version of the sculpture emerges. Surprisingly, the bronze is pale grey.

The above is a condensed and much simplified account of a long and complicated process. For example, with all but the simplest shapes the original clay sculpture is cut up into more manageable sections – six altogether for our farmer and shepherd.

But it isn’t the end of the story when the grey bronze pieces emerge from their smashed ceramic shells. The pieces have to be welded together, sand- blasted, blow-torched, washed with a chemical solution that darkens to brown as it dries (patination), doused with water, blow-torched again, painted with beeswax, and finally polished. In short, it involves a very close collaboration between artist and foundry over weeks of hands-on work.

Acting out the hiring 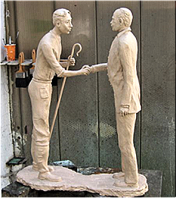 The final sculpture before patination 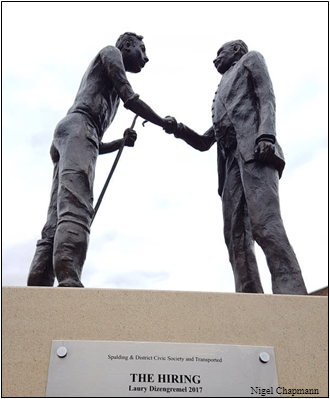 6 MAY 2019. The weather was fine. The music was jolly. The microphone iffy. The crowd about 70. The speakers were ready. The day of the long-delayed unveiling of Laury Disengremel’s sculpture had arrived.

Our partner Nick Jones, Transported’s Programme Director, placed the Market Art Project in the wider context of the Creative People and Places programme, funded by Arts Council England, which sets out to bring local people into closer contact with the arts.

John Charlesworth, the Society’s Projects Officer, spoke of the fascinating opportunity he and member John Honnor had had to follow the evolution of The Hiring through from the sculpture’s initial clay version, via the pouring of the molten metal, to the burnishing of the completed bronze. “In truth,” he  said, “I was rather in awe of Laury, though I did manage to pluck up courage to suggest a watchchain for the farmer and John got the shepherd’s wellies changed to gaiters and boots.” And he went on to outline the further sculptures and mosaics of farm animals envisaged by the project.

After a hiring fair song from Kim and Phil Biggs of the Spalding Folk Club, Councillor Elizabeth Sneath, SHDC Heritage Champion, congratulated the Society on its contribution to increasing the attractiveness of the town centre and hoped there would be more to come.

Prior to mounting on the base 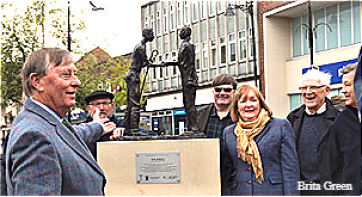 From left: Rex Sly, Nick Jones (Transported), John Bland (Chairman), Coun. Elizabeth Sneath, John Charlesworth (Projects Officer), David Jones (Vice- Chairman).
Finally, it was Rex Sly’s turn, farmer and author of several books on the history of South Holland’s fens and its people. He reminded us of the area’s long history of outsiders …… Dutch drainage engineers, Irish dyke diggers and harvesters, Italian internees on the farms and German POWs helping to build the post-war housing estates, and more recently the field and factory workers from Eastern Europe. And he stressed the great social value of local markets. “When a town loses its market,” he said,  “it loses its soul.” And he drew the covering away.
The Hiring was at last unveiled.
Society Member Nigel Chapman circulated amongst the crowd to hear what people thought.  “I think it’s   part of our history. It’s a lovely idea and enhances the town,” said Carol Branton. “I’m absolutely delighted with it,” said Heather Violett. “As a member of the Spalding Gentlemen’s Society I really do like to see and feel our past celebrated as much as possible.”
Other comments: “I think it’s fantastic” (David Jones – no relation! – who moved to the area about ten years ago and said he is about to join the Society). “It’s very appropriate. I think it’s good to see” (Judith Smith). “The facial expressions are excellent. I’m very much impressed with the detail. The idea of artwork in the town centre is an extremely good one” (Brita Green, York).
Farmer and shepherd freed at last, after their many months hobbled in red tape, to feel the open air, its sun and wind and rain, amid the strutting pigeons, and the bustle and buying of the market.