Not in the town centre 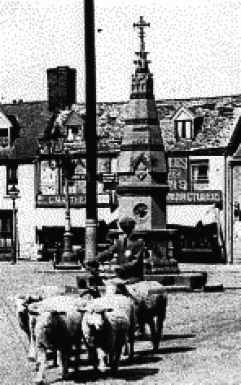 In the town centre

We note with concern the announcement that the District Council intends to locate the Johnson Drinking Fountain in a prominent position in Ayscoughfee Gardens.

We recall that after the fountain was removed to make way for the World War 2 memorial, at  the following Annual Meeting of the District Council in 2018 Cllr Grocock said:-

“It is my ambition to seek to reinstate the Drinking Fountain within Spalding town centre. I am, however, keen to ensure that this happens in conjunction with a wider consideration of town centre improvements.”

After referring to policy 25 of the South East Lincolnshire Local Plan, he went on to say:-

“I would hope the councillors would support me in proposing that officers embrace the opportunity, when implementing this new policy and considering the public realm within Spalding, to reintroduce the Drinking Fountain to a prime location in the heart of the town centre.”

Three years later he has broken that promise by proposing that it should be relocated back in Ayscoughfee Gardens.

We note that Cllr Grocock states that it is not logistically feasible to position the fountain in the town. However, he has not provided any evidence to support that claim. Furthermore  ,there has been no direct engagement with the people of the town or the Town Centre Regeneration Steering Group on the matter.

The idea that the fountain could not be restored as a working drinking fountain as part of the solution to combat plastic pollution does not stand up to scrutiny. There are many examples of historic fountains being brought back into use. Examples can be found in Sleaford, St Pancras Station, Ipswich, Norwich to name but just a few.

We also find the claim that it could not be positioned in the town centre because of traffic and potential damage incredible. There are parts of the town centre that are completely pedestrianised now which was not the case when it was removed, and at 70 tonnes it must be quite solid. Indeed in 1875, it survived a wagon running into it after the horses pulling it bolted with just a few scratches.

Cllr Grocock’s proposal has not even been put before the Spalding Town Centre Regeneration Steering group for consideration.  Given that national planning policy requires local engagement by local authorities as a part of plan making we feel that by not engaging with the steering group in advance of making his announcement Cllr Grocock has completely undermined that legal requirement.

The Society therefore has launched a public petition calling on South Holland District Council, Lincolnshire County Council, Historic England and Anglian Water to work with community groups such as the Society to find a solution that will restore the Johnson Drinking Fountain as a working fountain in the heart of Spalding town centre.